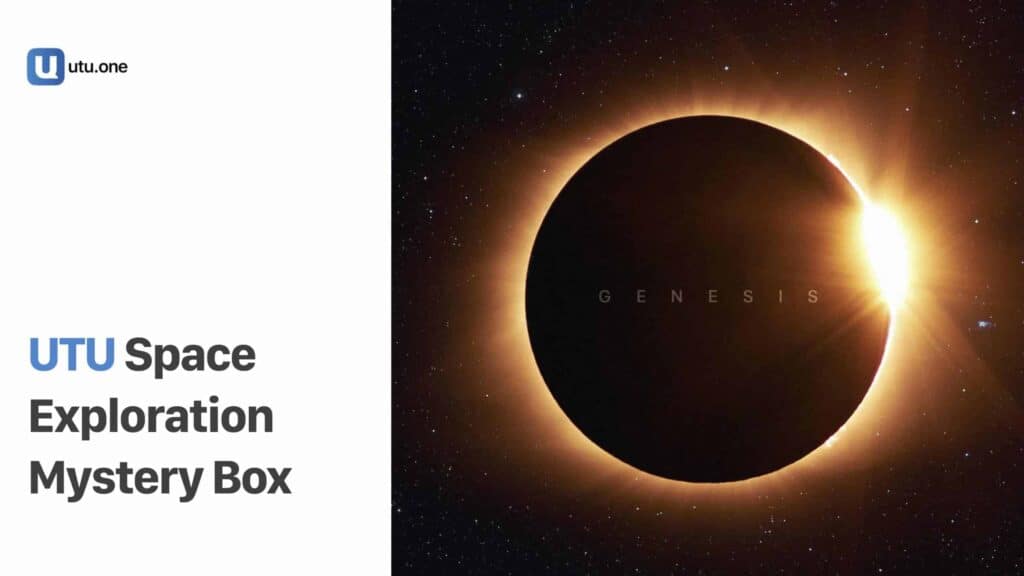 Space exploration was an inspiration for the first NFT collection, it tells the story of curiosity, innovation and advancement, which is also the core of UTU’s culture. This collection is also expected to address the climate controversy swirling around NFTs. UTU provides an innovative NFT minting & trading solution with little environmental footprint. All based on the first major carbon-neutral blockchain — EOSIO blockchain.

What would be better than collecting and showing off your own carbon-neutral planet NFT? Get hyped and take the ride with us to explore the magnificent beauty of the universe!

Each UTU Space Exploration Mystery Box is priced at 10 USD, and you will get:

• A random NFT from the UTU Space Exploration Collection: The NFT also denotes your UTU membership and functions as a UTU Annual Celebration Event (online/offline) ticket

The UTU Space Exploration Collection contains nine limited edition items to collect for space and astronomy lovers! It is a collection of 3D models of the Moon and the eight planets in the Solar System — Mercury, Venus, Earth, Mars, Jupiter, Saturn, Uranus, and Neptune. Each is given a unique look based on their real-life appearance.

The space is at your fingertips. Enjoy your exploration from the 3D view of planet, the surrounded blackness of space, and the faint lights of distant stars. We hope you will have as much fun exploring the collection as we did while creating it 🙂 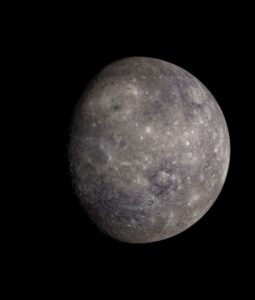 Mercury — the first and smallest planet in the Solar System — is only slightly larger than Earth’s Moon. It is the closest planet to the Sun. As such, it circles the Sun faster than any other planet, which is why Romans named it after their swift-footed God of Speed.

Mercury, Venus, Mars, Jupiter, and Saturn are the five brightest planets in our night sky that we can see with the naked eye. Of this list, Mercury can be the hardest one to spot because it never appears in a fully dark sky. When Mercury appears after sunset, it dips below the horizon before nightfall, and when Mercury appears in the morning, the twilight sky is already preparing for dawn. 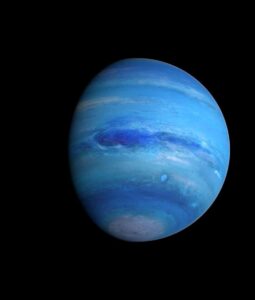 When you look at the mysterious sky in the middle of the night, have you ever wondered which planet is the farthest from us in the Solar System? It is Neptune. Because it is so far from Earth, it was the first planet located through mathematical calculations rather than by telescope.

You can appreciate the grace and magnificence of the least explored planet in the Solar System. Neptune was named for the Roman God of Sea. The dark blue color of the ice giant adds another puzzling layer to its already intriguing characters. There is something unique and inviting about this icy planet that has inspired humans to explore, discover and admire since ancient history. 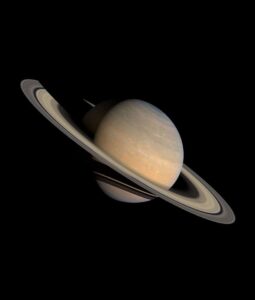 Color: Pale of Yellow with Hints of Orange

Among eight planets in the Solar System, Saturn is considered the most beautiful and fascinating one for most people because of its unique “ring”. Thus, the planet is called “The Jewel of the Solar System”. Humans have been puzzled by Saturn for a long time. They have been wondering about it for more than thousands of years.

Saturn is the second biggest planet in our Solar System, only behind Jupiter. It could float in water because it is mostly made of gas, and you couldn’t stand on it because of its component. The speed of wind on Saturn cannot be matched by it on Earth. Winds around the Saturn equator can be up 1,800 kilometers per hour. That’s 1,118 miles per hour! How crazy it must be to live there. 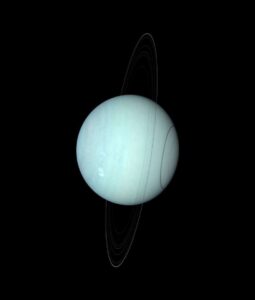 Have a glance at the bizarre planet Uranus in our Solar System. All the other planets spin like tops around the Sun, but Uranus lies on its side with its pretty face towards the Sun.

Uranus is the coldest planet among its peers, although it’s not the farthest. Uranus has a blue-green hue painted coat. Because the planet is so far away from Earth, we can barely use our eyes to see it in the sky during the night, which adds another mysterious layer to it.

Unlike any other planet in the Solar System, Uranus is the only one that is named after a Greek god rather than Roman God. The name pays tribute to the Greek god Ouranos, Father Sky — who is the father of Cronus (Saturn) and the grandfather of Zeus (Jupiter). 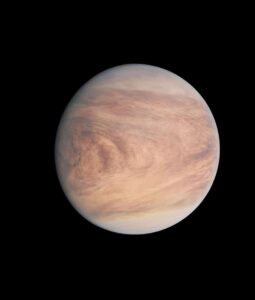 If you have ever looked at the sky just before dawn or just after sunset, you may occasionally have noticed a bright point of light low down in the sky. This is planet Venus!

As the second brightest celestial object in the night sky — only the Moon outshines it, Venus has been a major fixture in human culture. It is named after the Roman Goddess of Love, making it the only planet named after a female figure. It has long been a prime inspiration for writers and poets as the “morning star” and “evening star”.

Venus is the hottest planet in the Solar System — sustaining an average surface temperature of 462°C, hot enough to melt lead. It is also the closest planet to Earth. It rotates so slowly that its day is longer than its year. 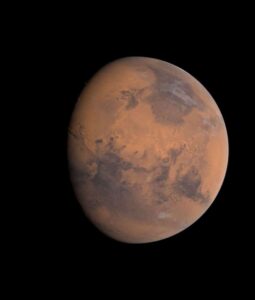 If you look up at the sky on a clear night, you may see a red dot among the stars. This dot is Mars. Mars is sometimes called the Red Planet. The reddish appearance of Mars’ surface is caused by iron oxide(rust).

Mars is the fourth planet from the Sun and the second-smallest planet in the Solar System. It is one of the easiest planets to see in the night sky, blazing bright orange and visible for almost the whole year.

Named after the Roman God of War, Mars is a dusty, cold, desert world with a very thin atmosphere. The average temperature on Mars is minus 80 degrees Fahrenheit — way below freezing! More like Earth than any other planet in our Solar System, Mars has a 24.6-hour day, an atmosphere, a rocky crust, canyons, volcanoes, polar ice caps, and seasons. 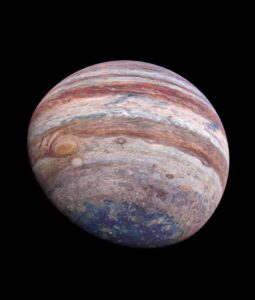 Jupiter is the grandest planet in our Solar System, which could fit across eleven Earths. Jupiter has the shortest day of any other planet; it rotates once about every 10 hours (a Jovian day). While 12 Earth Years are needed to complete an orbit of the Sun.

Named after King of the ancient Roman Gods, Jupiter owns a surprisingly long history to tell – all the way back to 1610. Massive world, light elements. Without a solid surface, the giant is made up almost entirely of hydrogen and helium and covered in swirling cloud stripes. Raging over a century, the iconic Great Red Spot can be seen as a gigantic storm almost twice larger than Earth. 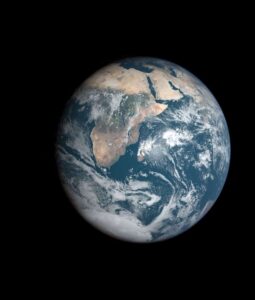 Earth is where we live. It is the densest planet.

It’s the biggest of four small rocky planets orbiting close to the Sun and the only one we’ve known inhabited by livings. Water covers 70 percent of its surface. Dominated by ocean blue, our home planet is covered by forest green, mountain brown, and a bit of ice white.

Formed by the force of gravity, it developed into a dynamic multilayered world with a searing hot interior, a cool rocky crust, broad oceans of liquid water, and an airy atmosphere. 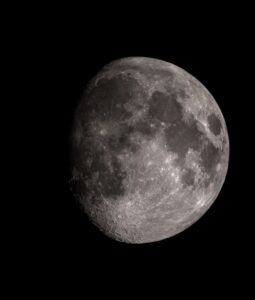 Most of the planets in the Solar System own more than one Moon. The one we talk about is the one for Earth. For a long while, it’s the only one we knew and were familiar with. It’s the brightest and largest object in our night sky and Earth’s only natural satellite as well.

The Moon is the only place we once set foot on except Earth. With a thin atmosphere called the exosphere, our Moon is like a desert with plains, mountains, and valleys. It’s all cratered and pitted from impacts. Thanks to its presence which helps stabilize the climate, Earth is capable for us to live in.

How to get your Space Exploration Mystery Box

Once you have the UTU app, click “Signup” on the login page and paste the invite code redefinesocial  to get started. You will receive some free UTU tokens to join the UTU community, then you are ready to purchase the UTU Space Exploration Mystery Box and win a chance for surprising rewards! 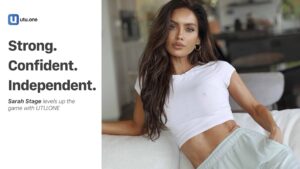